Marche Teatro is a public funded body active in the field of the performing arts producing and promoting contemporary artistic projects, hosting creative residencies and programming theatre spaces; it is supported by the Italian Ministry of Culture, Marche Region and the Municipality of Ancona.

Teatro delle Muse is the headquarter in the city of Ancona, with 1250 seats in the main venue plus two other smaller venues (50 e 100 seats) and other facilities including costume and scenography departments, a guesthouse, several rehearsal rooms, a cinema, a shop and a coffee bar. Marche Teatro also runs Villa Nappi in Polverigi, an ancient villa surrounded by a park, the historical place of Inteatro Festival. Villa Nappi is also offering rehearsal rooms and a guesthouse with kitchen; Villa Nappi is available to host artistic residencies all year long. Additional venues in Ancona city are Teatro Sperimentale (450 seats), a modern building with frontal stage, and Teatrino del Piano (99 seats), located in a suburb and devoted to special projects about audience development and community theatre.

Inteatro Festival, created in 1977, is the main international event devoted to contemporary arts; it hosts, coproduces and supports local and foreign artists and it is considered a meeting place for professionals from all around the world.

Would you like to collaborate with us, host one of our productions or cooperate for EU and international projects? Find more about us here below and get in touch with our team.

about us
current projects
productions 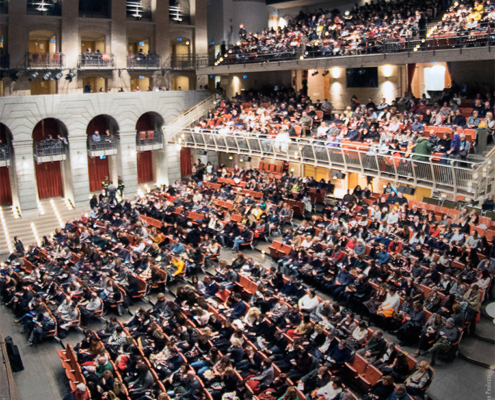 A brochure that describes all MARCHE TEATRO venues. 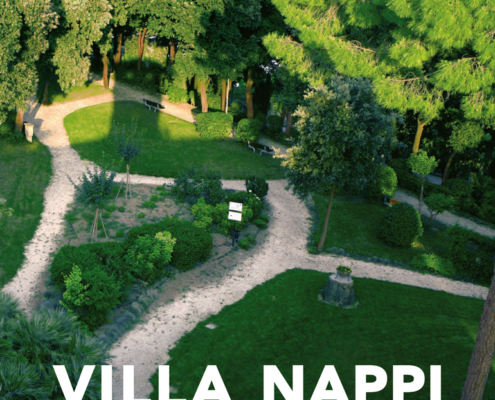 Brochure about Villa Nappi, one of MARCHE TEATRO venues, located in Polverigi (AN – Italy) 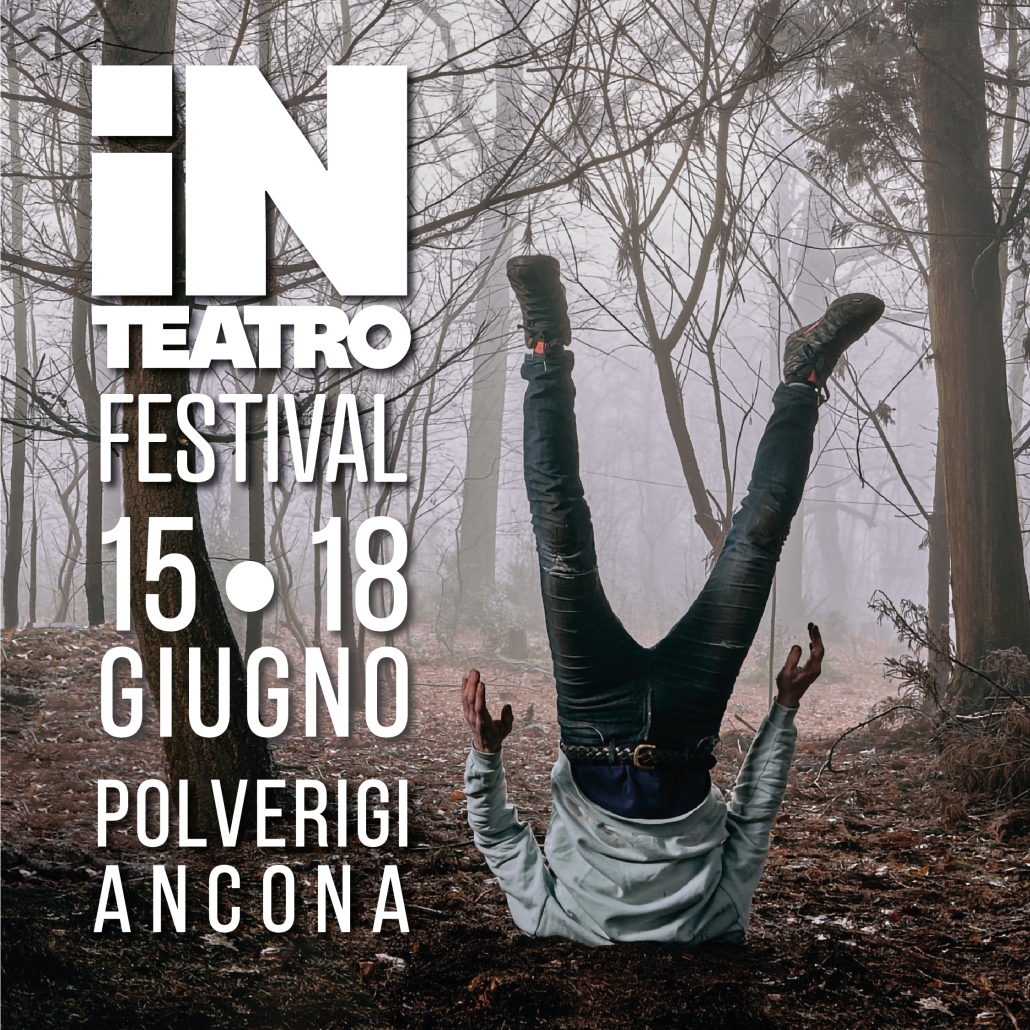 The 43rd edition of the Inteatro Festival will be held in Ancona and Polverigi from 15 to 18 June 2022.

check the program on www.inteatro.it

Crossing the sea is a long term-strategy project that aims to establish connection and cooperation between the performing art sector in Italy and Middle East, Asia and South America. A network of 7 Italian Festivals and Theaters cooperates with 21 international partners through mobility, residencies, touring, online exchanges. Marche Teatro is leader partner of the project. 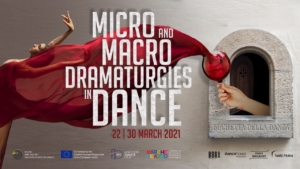 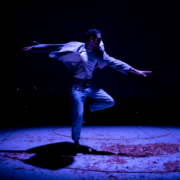 Our senses tell us a world of sensations as the magnifying glass that indicates the hidden in the obvious, showing the fear, poetry, frustration, freedom and its restrictions. An invitation to wonder, to be fascinated by what surrounds us with the naivety of a child, it
unwinds like a zapping of characters and worlds, sometimes similar and sometimes contrasting, painting before our eyes a varied and poetic picture that triggers the imagination in the spectator. On the whole there is a “crafty” quality linked to poor art since the materials used for costumes and set design are all handmade or reused objects. 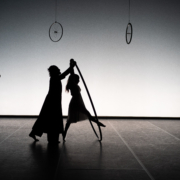 In Horizonte, contemporary circus, dance and visual arts mix to create a dreamlike atmospheres, that transport the viewer on an ancestral journey into the lost places of memory. The show was born from the encounter of two multifaceted and talented artists, with the desire to explore the meaning of transformation and change, the value of the experience in overcoming the known and the importance of abandoning our certainties through imagination.

The language and techniques of the circus, the symbolic value of the particular elements of the scene, the research for original music and sounds: these are the expressive, evocative elements that accompany the audience on an intense visual and sensorial journey, touching transversally the many and different sensitivities.

Duo Kaos is an Italo-Guatemalan company founded in 2009 by the encounter between circus and theatre artists Giulia Arcangeli and Luis Paredes. From the show on the street to the theatre, every time Duo Kaos goes on stage, a new imaginary world comes to life, the unmistakable poetic theatricality of Giulia and Luis joins an elegant, original and evocative acrobatic style. 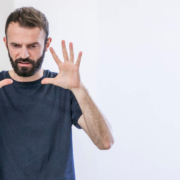 Alessandro Sciarroni is an Italian artist active in the field of Performing Arts with several years of experience in visual arts and theater research. His works are featured in contemporary dance and theater festivals, museums and art galleries, as well as in unconventional spaces and involve professionals from different disciplines. In 2019 he was awarded the Golden Lion for Lifetime Achievement in Dance by the Venice Biennial.
Alessandro Sciarroni is associated artist at CENTQUATRE-Paris and at Triennale Milano Teatro 2022-2024. His shows are produced by Marche Teatro in collaboration with various national and international coproduction partners depending on the projects. Some of the historical partners are Centrale Fies, Comune di Bassano del Grappa – Centro per la Scena Contemporanea, Amat, la Biennale de la danse – Maison de la Danse de Lyon, La Biennale di Venezia, Mercat de les Flors – Graner (Barcelona), Fondation d’entreprise Hermèsin the frame of New Settings and the association corpoceleste_C.C.00# of which he’s artistic director.

His works have been performed worldwide.

Full portfolio of his available works is here: https://www.alessandrosciarroni.it/video/?lang=en

“I think the work should be called In a landscape”: I would like to steal this title from the homonym piece by John Cage … and I would also like to use that track too. I think it holds the right atmosphere. Composed in 1948, for piano or harp “to sober and quiet the mind, thus rendering it susceptible to divine influences”.

For now, with CollettivO CineticO, we are training a new practice. As in other works of mine, there is always something light and mysterious in the obstinacy of repetition, something that seems to have an opposite energy compared to patience, fatigue, and to the obduracy of the action carried out. But this time I seem to be able to see more. They seem to me figures tending towards what seems to resemble a feeling of serene determination inclined to disappear: a voluntary extinction of the subject. An act of extreme love. The choice of a definitive departure.

But I admit that my gaze is not objective. 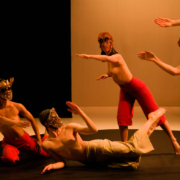 Il mondo altrove is a choreographic pièce in the shape of dance ritual, which celebrates the motion of an unexplored world according to a scenic mindset.

The pièce traces an ideal path between West and Orient and it’s freely inspired by South America’s indigenous rituals, Japanese’s symbols and traditions of Nō theater, and the composer Giacinto Scelsi’s obsessive – to some extent mystical and eccentric – musical research, focused on a spherical concept of sound.

From the main door – which overlooks the scenic area and hides a elsewhere – four shamanic figures finely adorned move forward to lead a magical and timeless ceremony. The movement of bodies and the features of their faces – veiled and reconfigured according to canons extraneous to Western culture – preserve and offer to our gaze the ritual of a possible different tradition, acted inside a circular bordary which delimits a space still attributable to the sacred and which collects the result of a harmonious coexistence between natural habitat and human action.

The action takes place at sunset, embraced by the bright colors of gold, cyan and purple, and then it dissolves in a nocturnal gestural dialogue, as expression of mutual support, perpetual gift, universal and celestial communion.

Faced with this physical language, we are invited to decipher the “hieroglyphs” of this unknown, wild and upside down civilization; we are guests encouraged to train to overcome the border of the known, discovering ourselves as foreigners among foreigners. Welcoming a new world and opening up to an unknown system means to come into contact, without pre-established hierarchies, with the poetry of an opaque language, whether it belongs to the animal world, the plant world or any alternative culture. Accepting the questioning of something about oneself and rediscovering own humanity in the reflection of the encounter. A king, a camera, a huge screen.

A dystopian world in which an unlikely character, a hypothetical French King, a beginner in ballet, is accompanied in his megalomaniacal desire for performance by a camera with a will of his own, and by a giant screen worthy of a pop star.

A lonely man, obsessed by the need to be admired, loved, observed and at the same time imprisoned by a look that never goes out. The complicit camera, that breathes, that dances and moves in unison with the performer, who is nothing without a hand that holds her, without an eye in the viewfinder, without an object to immortalize. The relationship between what the room shows and what actually happens is questioned, as is the need to have control over one’s image.